Western New York is known for it’s delicious food, from the Rochester garbage plate to the famous Buffalo chicken wings. On our last trip home we decided to hit as many WNY foodie places that we could.

We got off the plane and headed straight to the Pittsford Pub. I went with the intentions of getting their lobster grilled cheese (yes, you read that right) but a last minute decision led me to the garbage plate. Although Nick Tahou’s is considered the original and the best, most garbage plates are pretty delicious. A garbage plate is basically a bunch of thing you would have at a picnic piled high on a plate and covered in a spicy meat sauce. 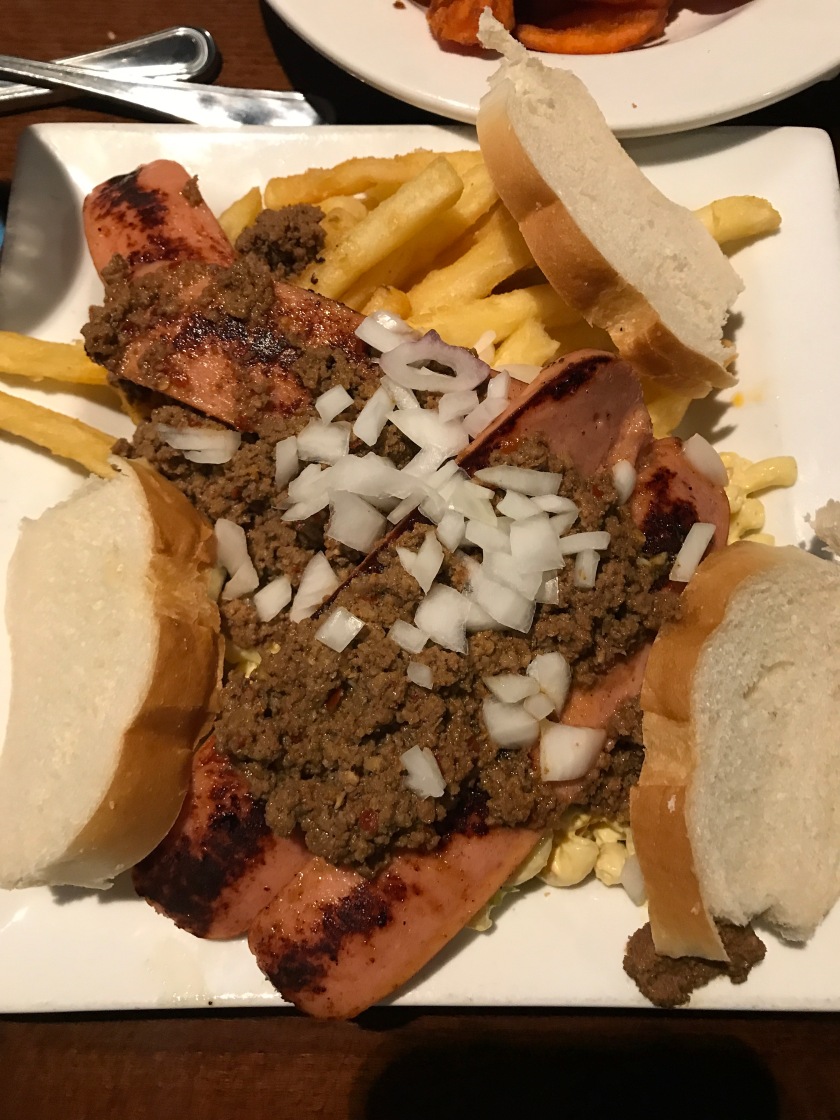 I like my garbage plate with hot dogs, fries, and macaroni salad. You can also get hamburgers or Italian sausage, and most places also offer home fries as the potato.

The next day, we headed from the Rochester area to the Buffalo area to hit up some Buffalo favorites. One of my favorite wings in Buffalo are at Bar-Bill in East Aurora, an adorable little town outside of Buffalo. Somehow The Husband, the self-proclaimed wing aficionado, has never been to Bar-Bill. Finally, after a bunch of nagging from me and reading about them on the Buffalo Eats twitter, we finally went. Bar-Bill came in first in their 2017 Chicken Wing Tournament so The Husband really needed to try them.

The reason I, as a borderline almost vegetarian, love these wings is because they are so crispy. They aren’t mushy or stringy, but cooked to perfection. (My other favorite wings, Duff’s, are cooked the same way.) The Husband didn’t love them as much as I did, but we got them medium and it isn’t that hot. Next time, we’ll get hotter sauce and he’ll fall in love. Just remember, they only accept cash, so come prepared with some green or bring your debit card (they have an ATM). 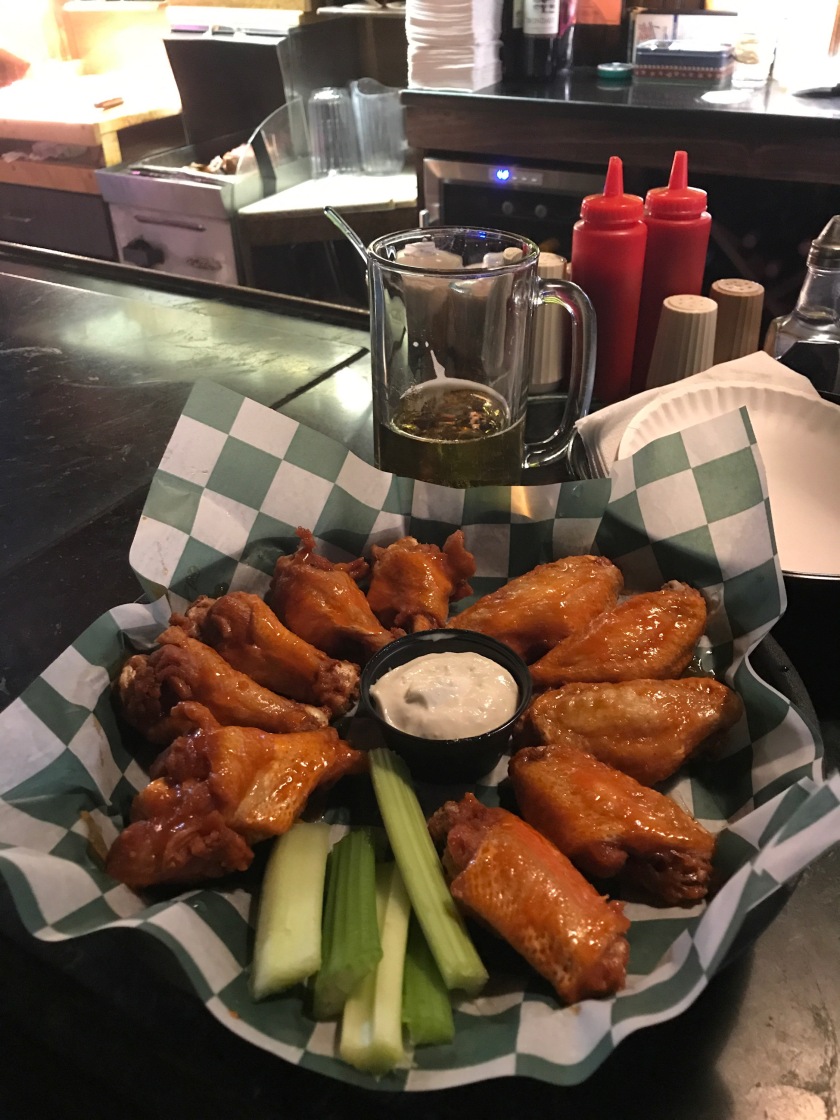 Our next stop was Garbriel’s Gate in Buffalo. They won third place in the Buffalo Eats Chicken Wing Tournament. Not only had we never been there but we’d never heard of it before reading about them on the tournament. We ordered medium wings, same as at Bar-Bill. The wings weren’t cooked the way I like them but the sauce was pretty good. The Husband liked them better than Bar-Bill strictly based on the sauce, but they didn’t have the crunch necessary to convert me.

Next, we headed to Paula’s Donuts. Well-known as the best doughnuts in Buffalo and The Husband had never tried them before! Nearly every western New Yorker knows that the peanut sticks are everything! Too full to eat there, we ordered a dozen to take home for the next day. 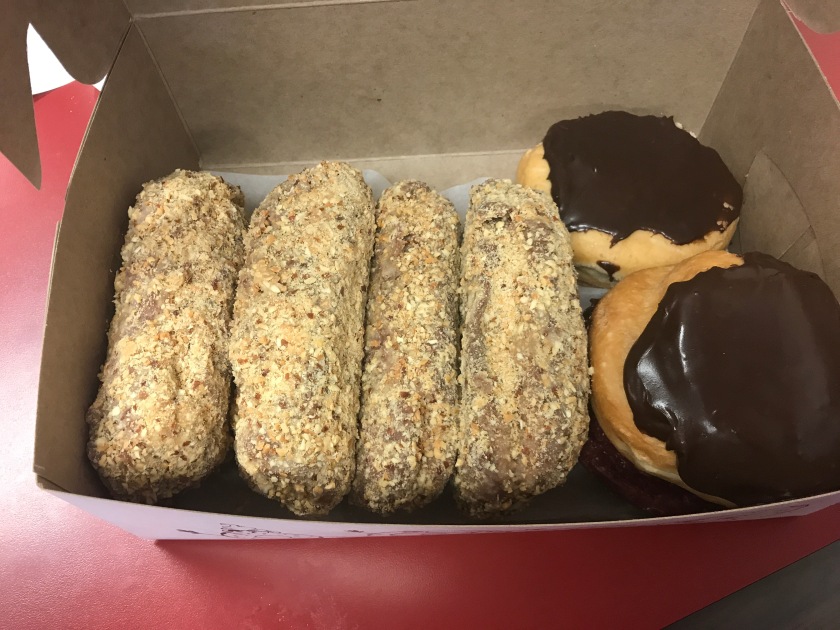 The best part of the peanut stick is the crunchy outside but super soft, delicious inside. Even The picky Husband agreed that they were amazing.

Still too full to eat and ready to drive the 70 miles home, we had to make one more stop for carryout. We couldn’t go back to Rochester without pizza, so we stopped at Picasso’s Pizza and ordered a large pie to go. It was the fourth best pizza on the Buffalo Eats’ Pizza Tournament, The Husband had never tried it, and it was close to the thruway we needed to take home. We ordered a large pepperoni pie and we were so glad we did! It was cooked to perfection with the perfect amount of char on the cup-and-char pepperonis. 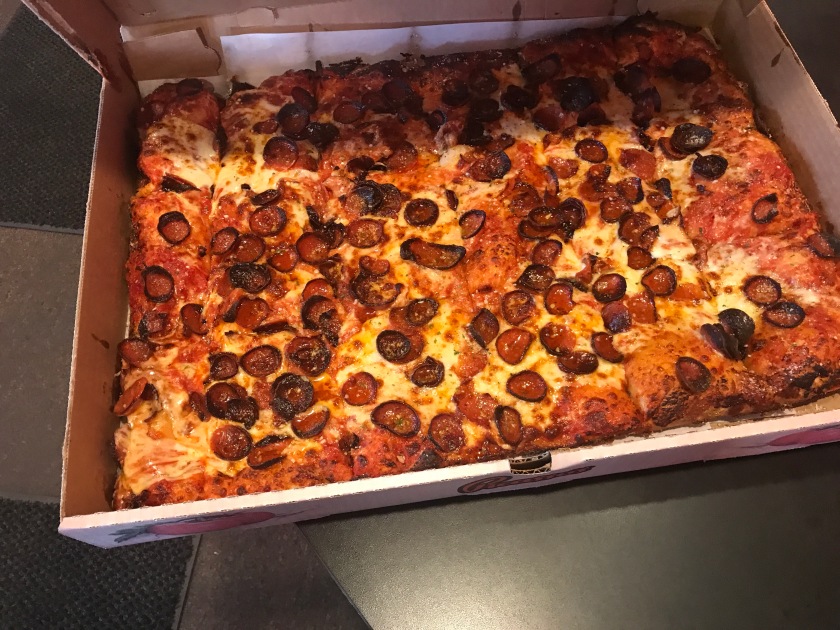 We headed back to Rochester with the car loaded with deliciousness. We skipped my favorite beef on weck, Swistons, because we ran out of time and stomach space. Same for Loganberry and Louie’s Hot Dogs. And let’s not even get started on the amazing Polish and Greek food!

The next day we headed to Dinosaur BBQ In downtown Rochester. They have some of the best BBQ around and it was yet another place The Husband hadn’t been to. In keeping with the theme of the trip, we started with the wings. Neither one of us had tried them before and what a surprise! They were fantastic! If they were just a bit more crunchy I dare say they might win as my favorite wings ever.

The Husband ordered the meat sampler. He had ribs, pulled pork, sausage, some cornbread, and mac and cheese for me. He loved the ribs and all of the sauces. I loved the mac and cheese (obviously).

I ordered the sampler appetizer because I wanted more wings and I wanted to try the fried green tomato. Everything was delicious. 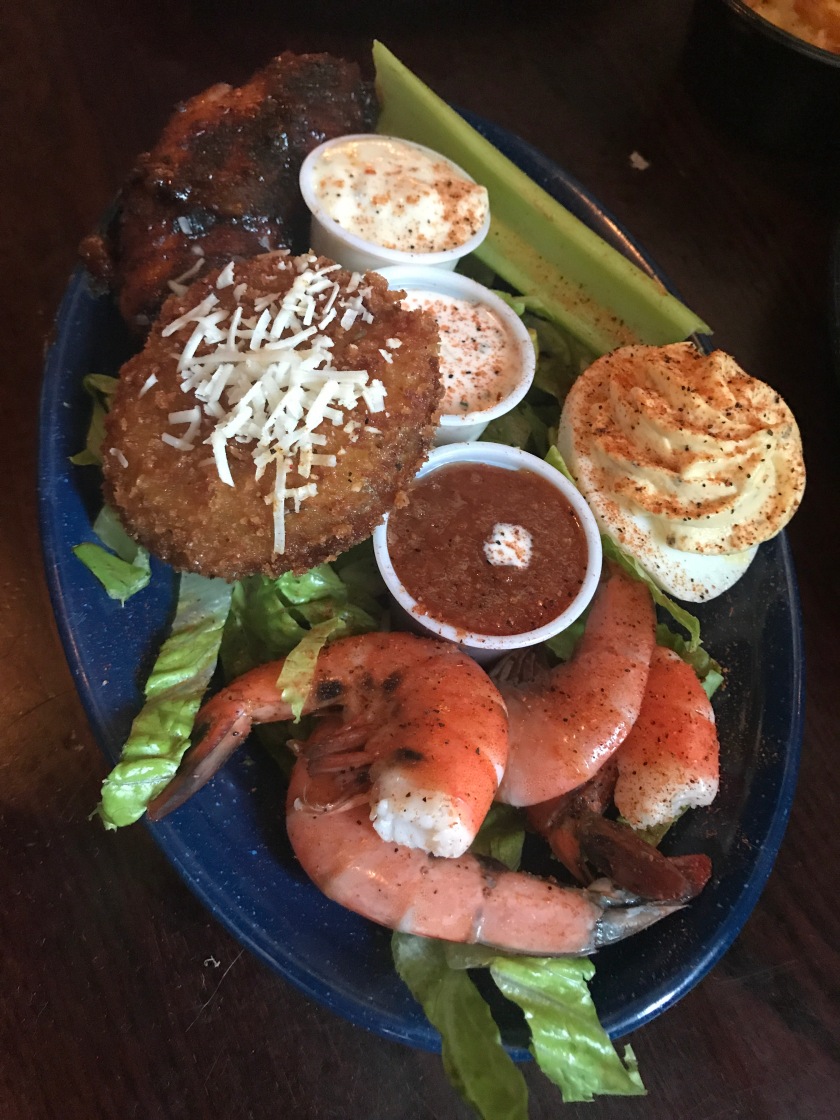 Our final western New York food spot was a stop for Perry’s Ice Cream. Perry’s started in 1918 when a broom maker bought a dairy outside of Buffalo. They make delicious ice cream flavors, including The Husband’s favorite, Piece of Cake. 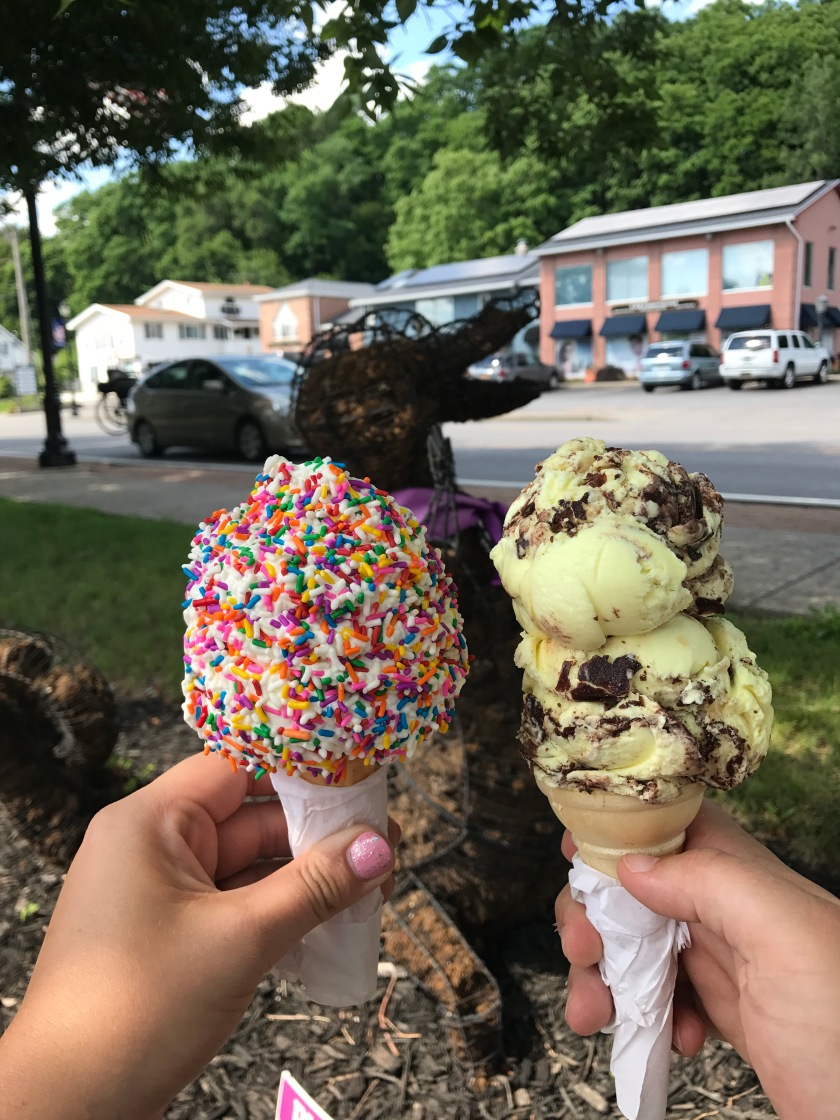 My traditionalist soft vanilla with rainbow sprinkles on the left, The Husband’s Perry’s on the right.

The food alone is worth a trip to western New York! There are so many delicious and unique eats in Rochester and Buffalo.