I’ve been to the Biltmore in Asheville, NC. (See post.)And I fell in love with it. So when the Husband suggested we head to Miami for our first wedding anniversary, I thought “Oh! Let’s stay at the Biltmore in Coral Gables.”

Actually, that’s a lie. The Husband’s friend suggested it and I took it and made it my own idea. Anyway.

So we drove to Miami, stayed at the Biltmore the first night and the Loew’s Miami the second. We had a lovely, wonderful, romantic weekend.

When you drive up to the Biltmore, you can barely stand the beauty of the trees. The road is canopied by these amazing trees. I love trees, especially the huge, twisted, romantic type.

And when the trees clear, you see the hotel. It’s so pretty. 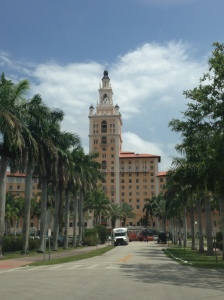 The Biltmore Hotel. Can you believe that it was a VA Hospital at one time? What a place to be when you’re sick or wounded.

So we pulled up to the valet, and it was the beginning of incredible service, which continued thru our entire stay. They took the car, took our bags, and walked us to the reception desk. And they did not take our tips. We learned a few minutes later that the $20 resort fee covers ALL tips! How can it possibly??? But everyone we tried to tip would not accept. Yet they still provided simply spectacular customer service.

So we checked in, we were given a tour of the main floors of the hotel, then escorted to our room. The room was standard in terms of size, but it seemed just right. The bed was a queen, but it didn’t seem too small.

The bathroom was small, but it was so classic and pretty. 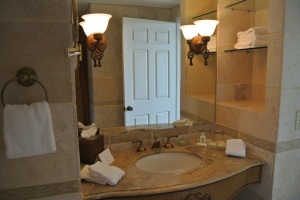 Such a gorgeous sink.

And the view. It was of the top of the tree canopy!

The pool. The largest pool in North America. Huge. Was filled in during the period that the hotel served as a VA hospital. Dug out to its original glory. And still spectacular. 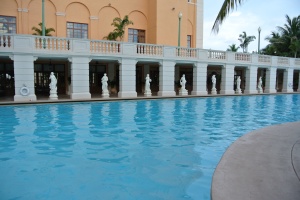 Most of the pool. Too big to fit the whole freaking thing in a photo! The girls in bikinis giving out free drinks and inflatable beach balls made it extra special.

Trying to be fancy and mysterious. Eh, it’s not for everybody.

My ONLY complaint. One simple complaint. I might not be old enough to stay there again. (Well, that and there were not that many lounge chairs by the pool. But I assume that’s due to the size of the pool, so I’m not complaining.) We took the free car service (which was wonderful!) to Miracle Mile, so the Husband could watch his Knicks lose, and when the game was finished (as well as the Knicks for the season) we came back to the hotel. The car service was no longer available and finding a taxi was actually quite difficult. Once we finally made it back to the Biltmore, there was only one place still open to get a drink. And they were getting ready to close. 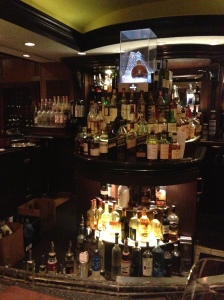 The cigar bar, the only place open to get a drink at 11 PM.

But it’s probably best, for my liver and my wallet, that every thing closes pretty early. So we headed back to the room and were delightfully surprised by the turn down service and slippers!

Yay for slippers! They were so soft and fuzzy.

It was so grand and wonderful there. The staff was so amazing and everything was great. But I don’t think we will stay there again anytime soon. And not because it wasn’t fantastic, because it was. It just wasn’t really our style. Maybe on our 50th wedding anniversary….