The day was finally here! I started planning this trip almost a year ago and it seemed like it was never going to come. Then BAM! It was here. The Husband and I flew home to Buffalo on September 3rd, which gave him a few days to see his family and me to see my friends. Then on the 5th our family friend picked us up to take us to the Depew Amtrak station.

We had too much luggage for a regular car. 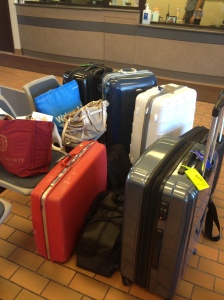 See what I mean?

The Husband and I, grandma, mother, and John, my stepfather, all had business class seats on the Amtrak from Depew (which is pretty much Buffalo) to the Canadian border. The train then becomes the VIA Rail, which really means it switches the signs in the snack car.

Usually when you get to the border on the train the Customs agent will walk through, check your passports, and you continue on your way. Well. For some reason, they decided we all needed to get off the train, and bring our luggage with us! What a pain. So we load everything up, haul it off the train (the Amtrak doesn’t check luggage) and drag it in the building. As we went through Customs, the agent told us to wait to the side and took our passports. We stood there while everyone else from the train went through Customs.

After everyone went through the agent pulled the Husband aside and told him he couldn’t enter Canada and was being deported back to the US.  I’M NOT KIDDING! The agent erroneously and very arrogantly refused the Husband entry to Canada. He told the Husband that he needed to learn to listen better. He was a terrible, terrible man and I’m sure he will live a very lonely life. I cried, I pleaded, I begged. I mean, it was my 30th birthday and a trip my grandma had paid a fortune for. But Agent Jerk didn’t care. So I got my stuff from the Husband, tried not to pass out, and said goodbye.

But wait. It gets worse. As one agent was taking him away, a train employee told me I had to get on the train, that everyone else was already boarded, including my family. So I wiped my face off, grabbed my stuff, and got on the train. As I entered the business class car, I realized I didn’t know anyone! MY FAMILY WASN’T ON THE TRAIN!!!

So here I am, no family, no Husband, (technically) in a foreign country. I called my mother and she said she was in the station, that an agent had told her to wait there until “everything was sorted out.” And the train had already left! So my mother, John, and my 86 year old grandmother found the first taxi and raced the train to its second stop (there was no way to make the first one).

This is where being a nurse pays off I think. Instead of freaking out, passing out, or panicking, I sat down and had a drink. The VIA Rail employee that told me my family was on the train felt terrible, so she bought. She also told me she was very impressed with how calm I was, considering I didn’t know where my family was and the Husband was on his way back to the US.

I tried to call the Husband, because he’s my rock and I was desperately in need of some stability, but no answer. I learned later that the agent took his cell phone from him when he was being driven back to the States. It really blew my mind how he was being treated like a criminal, when he’s clearly not.

So I sat back, finished my wine, closed my eyes, and prayed that my family made it to the station in time to get on the train.

So 45 minutes later we started to pull up to the second stop. No joke, I could see the taxi practically racing the train, and losing. They almost got stopped by the train crossing! Luckily they made it, literally at the last second. We pulled up, they got on the train, and everyone clapped. It was like a really bad movie. We all got settled, the VIA Rail lady bought everyone else a drink, and we sat down. Now I was plus three, minus one. Better than all alone I suppose.

We made it to Toronto without any more issues, but really, what more could happen.