We made friends with Taylor, the brewer for Goose Island at Brews with Attitudes, and saw him the day after at the Datz tap takeover. We asked Taylor and the Migration week crew about the Goose Island Beer Dinner the following day at Tampa Tap Room, and they were fabulous enough to put us on the list!

The Husband and I used Lyft again and headed to Tampa Tap Room. We weren’t sure what to expect but we knew it would be delicious. There was a long table set up in the middle of the restaurant that was just for the beer dinner.

It was open seating, so everyone headed to the table and found a seat.

Each place setting had the pairing menu, an explanation about each beer, a Goose Island sticker, bottle openers, and some pins.

Info about the beer.

The first course started right away. The bartender delivered us each a pint of Goose Island 312 Urban Pale Ale (instead of the originally planned Urban Wheat). I don’t generally like pale ales because I’m a beer fan that doesn’t like hops (sacrilegious, I know), but it was delicious with the food and so much better in draft than in a can or bottle.

Apparently I was thirsty and forgot to take a photo before drinking.

The 312 came with crab and shrimp augratin over a fried piece of eggplant. It was amazing. The crab and shrimp was so fresh and the sauce wasn’t heavy or salty. I don’t care for eggplant usually, but it was so good. Even the picky Husband liked it!

If the Husband likes it and it’s not pizza, you know it’s good!

The next course was Goose Island Fulton & Wood Rasselbock (the original Goose Island brewery is at the corner of Fulton & Wood). While we ate and drank, our new friend Taylor, one of the brewers for Goose Island, talked about the process of making the beer. I thought I wouldn’t like it since it was a German style dark beer, but the yeast they used leaves a banana taste and it is so good! Also we were told that this was probably the most rare beer we would have maybe in our lives.  Only one batch was made and it usually never makes it’s way out of Chicago. The Husband tells me that this beer only had 2 check-ins on his UnTappd app when he looked it up, and one was the guy sitting next to him! 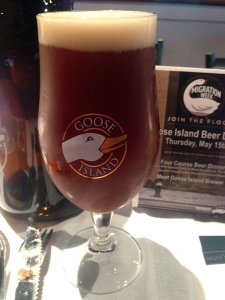 Mussels and frites were paired with the Fulton & Wood Rasselbock. The mussels were so good that some of the smart people around us got their hands on some bread and soaked up the sauce with it. The frites came with garlic and mango aiolis and they were both good, but the garlic was the best.

The Husband ate my fries. He’s not brave enough to try mussels. But maybe someday.

The third course was Goose Island The Ogden. It’s a strong Belgian style Tripel (9% ABV) but you can’t tell how strong it is by the taste. It was quite hoppy, though, and the Husband loved it. 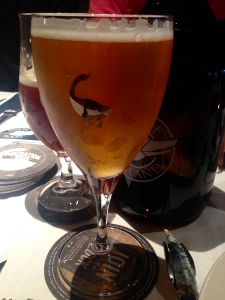 Served in a smaller glass due to the high ABV.

The Ogden was served with a roasted pork tenderloin, mushrooms, pollenta, asparagus, and bone marrow demi. Pork is one of the few things that the Husband will eat that I won’t eat. Everyone around me said it was really good, and the nice couple at the bar that took my plate looked like they really enjoyed it. 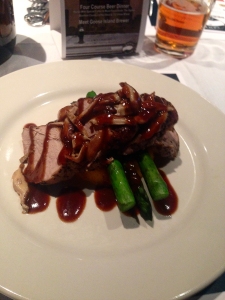 The presentation was gorgeous.

The last course was (obviously) dessert. Goose Island Bourbon County Coffee Stout was served in a very small glass, as it was the highest ABV at 13.4% (!). It was a sweet, coffee flavored stout and at first I thought it was ok.

But then dessert came out. It was an amazing, rich, decedent chocolate flowerless torte with white chocolate ganache and fresh raspberries. It was like a sweet piece of heaven in my mouth. The Bourbon County Coffee Stout went so perfectly with the dessert and took on a whole different flavor. It was wonderful. It reminded me of a food tour we took in Vancouver, where we dipped devils on horseback in a porter and all of a sudden I liked two things I didn’t previously like! 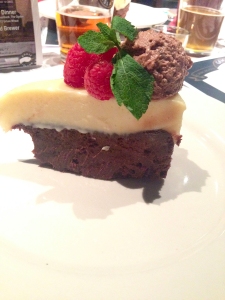 So amazing, I seriously would have licked my plate if I was home alone eating it.

It turned out that we were sitting across from JP Pepin, of Pepin Distributing, and his son Tanner. It was pretty cool to thank the man that brought such fabulous events (not to mention our favorite beers, Goose Island and Labatt Blue) to Tampa. He was super nice, but anyone who’s title is “Passionate Purveyor of Malt & Hoppiness” must be pretty awesome.

I told him how awesome whoever was in charge of Pepin Distributing social media is (follow them on Twitter: @DrinkBeerTampa) and it turned out he was there. Keep up the good work Oytun Tutuncu!

Cheers from the Pepin Distributing team and the owner of Tampa Tap Room!

We had so much fun pairing such unique Goose Island beers with such delicious food. It’s always fun to discover something you like that you would never guess would be good. It was also so nice to meet the staff from Goose Island and Pepin Distributing. I’m such a nerd and I love learning about the process of everyday things that we take for granted. I feel like a more educated beer drinker, now I know more about the process, from the first concept at the brewery to distribution to my local store. If only I could learn to love hops.