So, obsessed. The last thing he crossed off his bucket list was sports-related too. This time, it’s baseball. He loves the San Francisco Giants.  And although we have seen them play in both Tampa and Miami, it’s not the same as seeing them at home at AT&T stadium. And they just happened to be playing while we were in San Fran, so I bought tickets for his birthday.

I kinda sorta like watching baseball. For a minute. There is something that I just really REALLY love about men in baseball pants, especially the big guys. I love Kung Fu Panda Pablo Sandavol so much that the Husband bought me a Kung Fu Panda hat.

Even the Husband liked the hat. 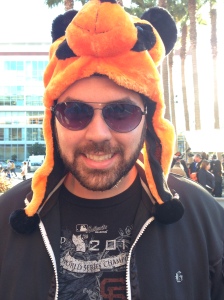 I think it goes really well with his Canada beard.

Super cool way to get to your seats!

Once inside the Virgin club level, you can check out all sorts of (the Husband tells me) awesome memorabilia.

Just one of the many sections of stuff.

The Giants were the 2012 winner so of the World Series so guess what the Husband got to see….

He loves that the Giants won it, I love that it was made by Tiffany’s. Where is the giant blue box?!?!

The stadium is really pretty. The outfield and the signs with the Coke bottle are really cool. 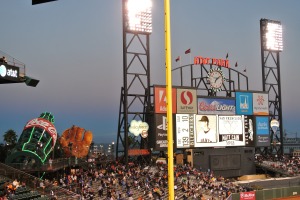 And it’s right on the water. You can kayak right outside the stadium and wait for a home run to land near you in the water. And the balls do go that way. I know because I almost got hit in the head by one! 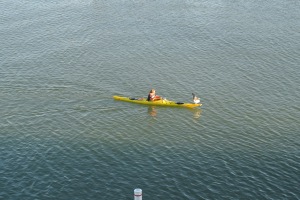 Just a man and his bird, waiting for a ball.

One of the best things about going to a sporting event is the excuse to eat terribly unhealthy, terribly delicious food. Everyone we came across in San Fran said we ABSOLUTELY had to try the garlic fries. So clearly, we did.

Why not get them as bed to our chicken fingers.

And oh my goodness, they were fantastic. The garlic is so super fresh. I assume it comes from Gilroy, the garlic capital. It’s just south of San Fran. Close enough to take their lovely train in to the city for the game.

The weather was a little cold for my now-Florida blood so I had to have some Ghiradelli hot chocolate, also a local flavor. 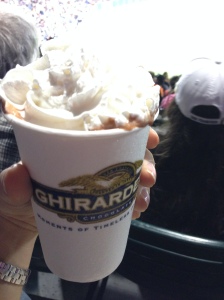 So warm and rich and yummy. And it came out of a guy’s backpack.

But the cold the worth it. The Husband was so happy to be there, even if the Giants lost.

After the game we headed back to the train to go to our hotel by the airport. The train in San Fran is quite impressive. It’s clean, quiet, has bathrooms, and lots of places to sit.

Be sure to take the train somewhere when you go to San Fran. A really lovely experience (even after spending weeks on the train!).

So now that the Husband is happy and has crossed something off his bucket list, it’s my turn next!