What a disaster. I really have no other word to fully describe the beginning of our Switzerland/Italy trip.

We flew Edelweiss Air nonstop from Tampa to Zurich, Switzerland. We hate flying and going nonstop makes it a little easier. And taking the train through the Alps in to Italy sounded positively amazing. So we booked our tickets out of Tampa.

Tampa is known for its storms. It’s even said that Tampa is an old Native American word for lightning. So storms are not new issues, nor do they last long. A few minutes of a good downpour, a loud boom of thunder, maybe a lightning bolt or two, then the skies clear and the rainbows come out and everyone forgets that it happened (unless you have naturally curly hair, because the humidity will ruin your hair for the rest of the day).

As we were waiting for the world’s longest curb side check in it began to rain. Typical Tampa rain; hard downpour out of nowhere. Thank goodness the check in was under the cover of a roof, because we really out there for what seemed like forever. 55 minutes to be exact. Of course, the line inside was much longer but you are generally paying for quick service at skycap. The lady behind the counter clearly had no idea what she was doing. But we finally checked out bags and made our way to our gate.

If you’ve never flown in or out of Tampa then you don’t realize just how easy the airport is. I am, on average, 25 minutes from my door (of my house!) to my gate. It is fast, easy, efficient, and the staff is very nice. Just the wait outside to check my bag took longer than the whole process generally does by more than two fold. I should have known then that there was going to be more problems.

As we went through security it started to really rain. Loud thunder and heavy downpour. Flights all started to show up as delayed. We, obviously, headed to the bar to wait it out. We occasionally checked for an update and never received anything. The only reason we were panicked was the crew was a few tables over, playing cards and having fun. My main flying motto is that if the flight attendants look calm then I should too.

Then on a trip to the bathroom we noticed that the monitor said the plane had landed at 6:21 PM. We couldn’t see the plane anywhere but figured it was just waiting to come to the gate. The weather had cleared up and other planes were landing.

A few minutes later I received a text update from Edelweiss Air that the flight would be delayed at least 60 minutes. I thought it was strange since the plane was listed at landed so I headed up to the counter to find out what was happening.

It turned out that the plane had landed at 6:21 in ORLANDO! What?!?! The first report was that the weather was bad ad there was a tornado warning and the airport had closed and our plane missed clearance by seconds. A little while later I heard that the plane didn’t have the federally required fuel minimal so it couldn’t circle and had to land. I heard some mention of Lakeland, but Orlando was where it ended up.

So now we knew why we were delayed. Sure, the weather sucked. But true to Tampa style, it was short lived. Planes began to land pretty soon after. But our plane didn’t have enough fuel!

Sounds like a pretty easy fix, right? Fuel up and head back to Tampa. Wrong. Edelweiss doesn’t have service at Orlando International Airport, so they apparently couldn’t get any fuel. So the higher ups made the executive decision to bus everyone to Orlando.

By this time it was around 10:30 PM. We were originally scheduled to leave at 7:20. Three hours later we still were waiting at the airport because no one would tell us what would happen next. As locals, we wanted to just head home and get a ride to Orlando when they had everything figured out. But we weren’t allowed to leave because our luggage was in containers somewhere. So 300 of us sat around a closing airport, waiting to be told something. It was so hard to get information and every time someone complained to what seemed to be the main employee at the counter, you could tell he was practically reading from a script, validating your concerns without addressing them. “Yes, ma’am, I know how frustrated you are and we are trying to fix it.”

Around 11 PM a plan was finally explained. Locals who wanted to go home could get their bags and head home. But they (we) were responsible for getting to the Orlando Airport the next day by noon for a 3 PM flight. Yes, our flight was rescheduled for 19 hours later. It seems they took so long trying to decide what to do that it was too late to leave, since Zurich has a no arriving flights during the night until 6 AM rule. And they had no idea where the plane would be leaving from. Since Edelweiss doesn’t fly from Orlando there are no counters, baggage claim, signs or anything else. And the staff had no idea, telling me to “Just ask around when you get there.” Hilarious! Orlando International is a pretty big airport and quite busy. But after being my charming self, I convinced the nice man that had taken over the area to give me is phone number so I could call and find out where to go. Mucho gracias to you, sir.

So around 11:30 PM we grabbed our bags, grabbed a taxi, and headed home, extremely irritated and exhausted. There was our first addition expense ($20).

19 hours and 40 minutes?!?! Got this gem while I was sleeping. At home. When I should have been in the air…

People who did not live nearby were going to get food and beverages from a caterer, while waiting for buses from Orlando to drive to Tampa, pick them up, and take them to Orlando. Now, we weren’t there but I was told the next day that the “catering” was actually mini bottles of water and pretzels. Not even real food (and they honestly should have provided some alcohol). The buses finally arrived after 1 AM and took the rest of the passengers to assorted hotels around the Orlando Airport, since there were too many passengers for one hotel. They apparently got to the hotels around 3 AM and had to be outside the hotel by 10 AM to go to the airport.

Since we lived nearby we now we were out the taxi money, as well as the money we spent at the airport waiting for news on our plane, even though they knew damn well it landed in Orlando. Then we had a friend graciously enough to agree to drive us to Orlando, and it turns out that gas isn’t free. But my friend, Sandra, got us to the airport before noon, since we had strict instructions to be there by noon. The staff apparently didn’t have to be there by noon, because no one was ready with instruction on what to do. One person sent us one way, another sent us another way. Most employees that we tried to ask had no clue and informed us that Edelweiss doesn’t fly from Orlando. Finally, we found the area they had taken over, in a nearly abandoned, not air conditioned space. And it was almost 90 degrees out!

My awesome friend Sandra driving us (and a random German) to the airport in Orlando!

So 300 tired, agitated passengers had to wait in a long, hot line to do the exact same thing we had done the day before: check our bags! At one point as staff member told us to pull the old luggage tags off to expedite the process of rechecking the bags. So we all did. Less than five minutes later a different staff member told us to leave our tags on, since they were going to use the same ones! Get it together already Edelweiss! Tags or no tags, they finally started to bag checking process at 12:35. So much for being there by noon at the very latest.

Half of the line of people waiting to do the same exact thing we did the day before!

As we checked out bags (again) we got a voucher for a free meal worth $20 (alcohol NOT included) valid that day only and only at the Orlando Airport. Sounds nice, except no one got through baggage checking and security before 1 PM, and we had strict instructions to board at 2 PM so we would leave right on time at 3. Most people didn’t even have enough time to grab something to go. But since we were all in a hurry and had already lost a day, we complied and were on the plane by 3. Which would have been great except we sat on the plane until 4:35 PM!! That’s right, we took off at 4:35.

But the worse part about this whole debacle? The things everyone missed by losing a day. The Husband and I alone lost our first class train tickets through the Alps from Zurich to Milan, then first class tickets to Venice. We lost our money for the night we paid for in Venice. We lost a day in Venice, which included a full day tour of all the sites and an evening gondola ride. We actually got to Venice too late to really do anything but wander around in the dark. We went from having two nights in Venice to having under 12 hour. And we had to book new tickets, and most were sold out because of a Swiss holiday and we had to book coach. That’s a lot of money to lose and a lot of memories that now we can’t make. And there were people who were missing very important events. A young tennis player from the Czech Republic wasn’t going to arrive in time to register for his match, and registration must be done in person. A woman and her husband were missing her mother’s funeral in Poland. These are very important life moments that are gone.

The thing is that it wasn’t just the weather. I live in Tampa and I fly all the time. I saw other planes landing and taking off shortly after the storm. It was poor judgment on someone’s part and it caused unnecessary stress and losing money for lots of people. Edelweiss handled this whole issue very poorly. And it’s really too bad, because the flight was pretty pleasant and we did meet some really nice people. The flight attendants on the plane were friendly and attentive, the food was actually pretty decent, and even the bathrooms were tolerable. 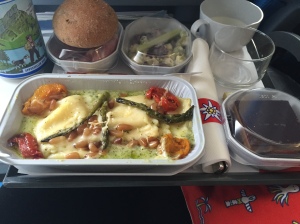 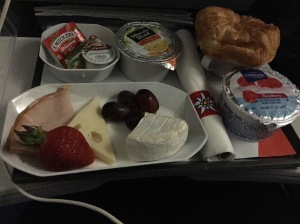 The in seat games and movies were pretty good too.

The actual seats were pretty terrible, though. They give you the cutest pillows to use on the plane, but I had to use mine to prevent the development of a bedsore on my backside. The room between seats seemed extra short too. I was sure the people in front of me must have reclined their seats, but they were like that from the moment we got on the plane.

The lady behind me apparently didn’t have enough space (nor manners) either. Coincidentally enough, I developed a cold two days later…

I have such mixed feelings about Edelweiss Air. The flight attendants were great and the plane was pretty nice. They had a great collection of movies and games you could play at your seat. But there is something off about the whole redirected situation.

But I have no choice but to fly them back to the States, since I already have my tickets. Fingers crossed the way back is better!