The Husband was in the Christmas spirit and bought us tickets for the OMG Trolley Holiday Lights Tour. The tickets were only $15 and included a drink at Jackson’s Bistro that you could bring on the tour! A drink, Christmas music, and beautiful houses covered in twinkling lights? What more could a girl ask for? 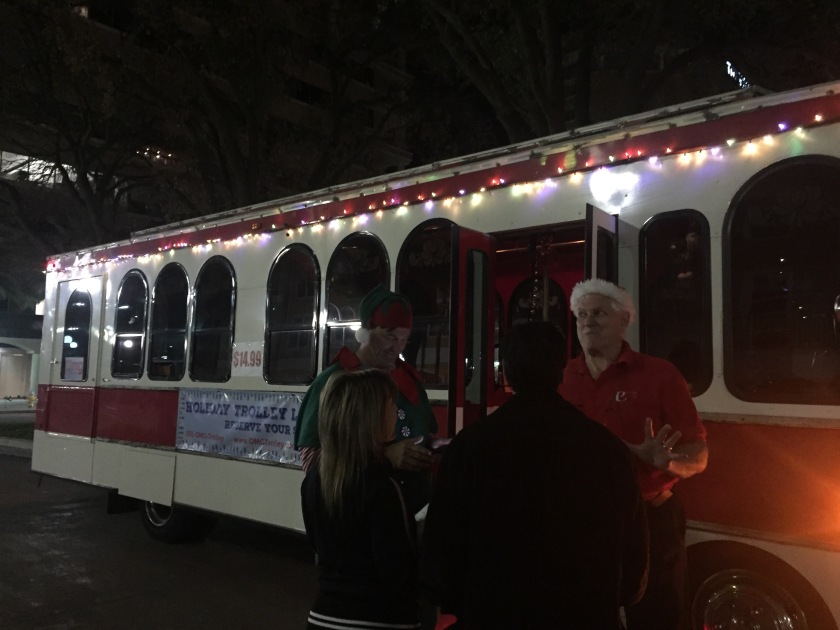 Boarding the trolley at Jackson’s.

The tour left from Jackson’s on Harbour Island at 8:30 and drove us all over South Tampa, showing us the best lights. The tour guide and bus driver were hilarious; rumor is the trolley will be a comedy trolley after Christmas, going to Ybor, Howard area, and even Cigar City brewery.

We began our tour driving around the Bayshore Beautiful neighborhood. (For those who don’t live in Tampa, Bayshore is a road along the actual Tampa Bay, and you’ll find some of the most beautiful, and expensive, houses you’ll ever see. It’s also the home of the world’s longest continuous sidewalk.) Some of the streets coordinate their Christmas lights; one street covered all the trees along the street in white lights and another had large colorful balls lit up and hanging from the trees.

Our next stop was Hyde Park, where we had five minutes to get out and walk around. There is a beautiful tree, lots of lights, and giant, colorful presents. Not to mention all the fabulous stores and restaurants (too bad we didn’t have longer). As the trolley pulled away we noticed that the tour guide wasn’t there. A few moments later we saw him running down the road, being carried by Santa! It was a really cute little skit and the trolley roared with laughter.

The tree in Hyde Park

The Husband and me in Hyde Park on the one “cold” night in Tampa this year (it was 50 degrees!)

The trolley in Hyde Park

We sang along to Christmas carols as we headed towards toward the rest of the homes we would see. Our tour guide rescued a reindeer that had fallen over and hugged a giant polar bear. We saw houses that had light shows timed to music and they were very impressive.

The tour guide picking out Christmas songs (and the Santa he rode in on!) 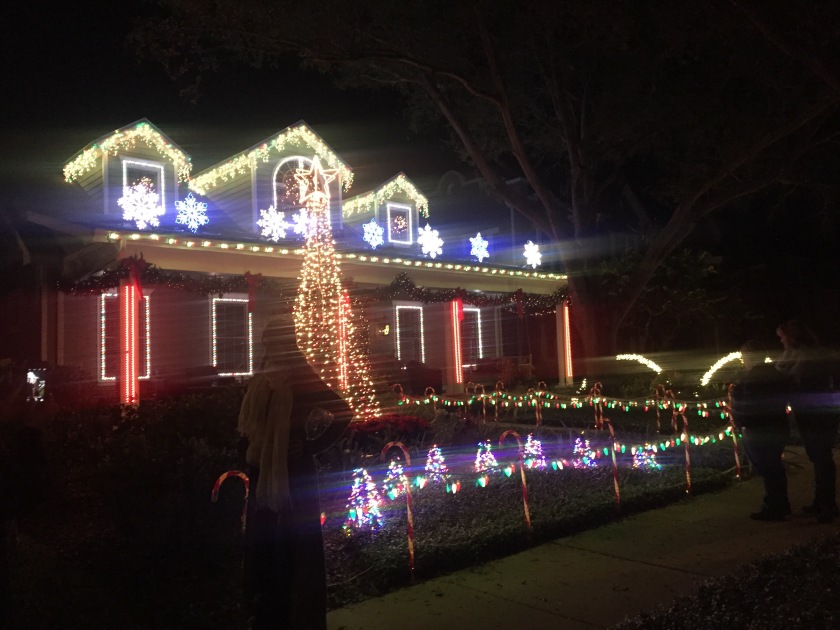 The tour was really fun and upbeat. The hour and a half went by quick. The red light trivia was really interesting; did you know that Teddy Roosevelt wouldn’t allow Christmas trees in the house because he was worried about the impact of Christmas trees on forestry conservation? (His kids ended up hiding one in a closet, under which Teddy put Christmas presents anyway.)

We had a really good time on the trolley and so did everyone around us, regardless of age. There were kids and grandparents alike. I would definitely recommend the lights tour.