We had just one day left, with our train leaving from the Via Rail station in Moncton at 5 PM. We drove a little the night before, trying to get as close to the Hopewell Rocks from the ferry station in North Sydney. As the sun set, we were treated with this beautiful view. 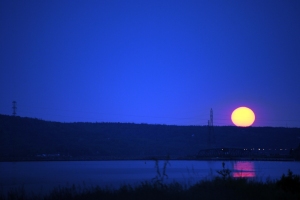 Such a beautiful sunset!

We headed out early in the morning, with a goal of making it to the Hopewell Rocks before the low tide at 12:30 PM. The tide at the Hopewell Rocks changes by approximately 40 feet TWICE A DAY! We were hoping to see both high tide and low tide, but crappy weather when we arrived and time issues kept us from seeing high tide. But we made it in time for the lowest of low tide and it was so freaking cool! 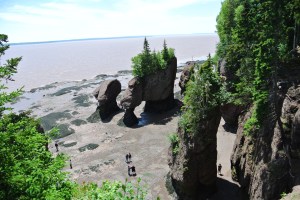 Looking down at the rocks during low tide. During high tide, the arch in the middle rock formation is completely covered.

And apparently the tide rises pretty quick and can trap you for hours! 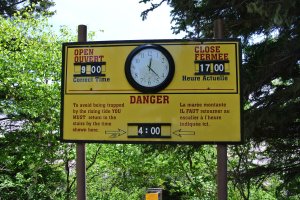 I would not want to get stuck there when the high tide comes in!

Mother and grandma decided they weren’t interested in climbing down then back up all the stairs required to get to the floor. 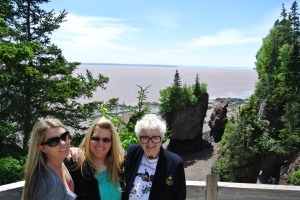 An awesome lookout point with very knowledgeable guides that tell you all about the rocks and show you a time-lapsed video on their iPads.

So the Husband and I headed down the stairs. 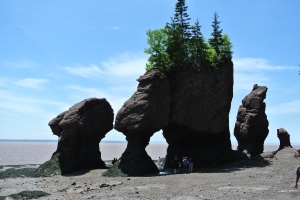 You can see how high the high tide goes. 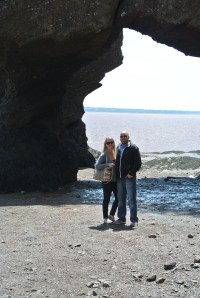 The Husband and I under the arch. 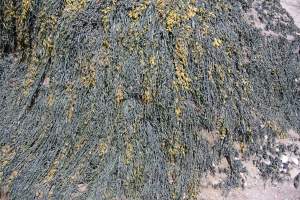 The floor. It was still wet!

It was really neat to walk around the wet floor, knowing that soon it would be covered in water again. I hope I can make it back sometime for high tide. It’s really not that far from Maine, and I’ve always wanted to see Maine…

When we were done marveling in the awesomeness that is the tide changes, we headed back to the car on the shuttle that takes you from the observation area back up to the main center. We had some time to waste before our train so we headed towards Moncton.

As we drove by McDonald’s I saw a sign for a McLobster. McLOBSTER?!?!  Of course I had to try it!! 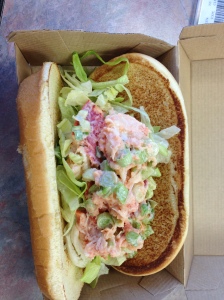 I heard about a spot called Magnetic Mountain, and its an area where you put your car in neutral and the magnet pulls your car backwards up a hill. Sounds weird, I know. But it really happened. We did it a bunch of times, forwards and backwards. And the car really got going pretty fast for being pulled backwards, up a hill, in neutral.

Not easy to take a photo while being pulled backward up a hill.

According to the internet (so it must be true) it is just an optical illusion. But I SWEAR the car was going BACKWARDS, UP A HILL, IN NEUTRAL!!! And I’m sticking to it.

Reluctantly, we finally got back on the Via Rail and headed towards Toronto, to the end of our trip. We spent the night on the train, switched to business class in Montreal, and enjoyed the last ride of the trip. And as we pulled in to Toronto grandma asked for the plastic back… 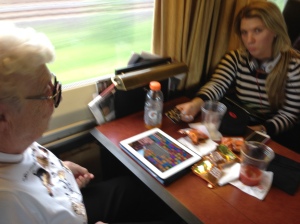 The saddest part of the trip. And yes, even grandma is obsessed with Candy Crush.

Our ride picked us up in Toronto and as we drove back to the States, all we could talk about was how excited we are for our next Canadian trip!