Adam Richman had named Zunzi’s Conquistador sandwich one of the best sandwiches in America. And since the Husband and Adam seem to have the same taste in food, we obviously had to try it.

Turns out it was located right across the street from our hotel, the River Street Inn. After we were all settled in our hotel we headed over there to eat.

We sat at the bar and ordered some beers. I decided to try the Conquistador because it sounded as delicious as Adam Richman said it was. 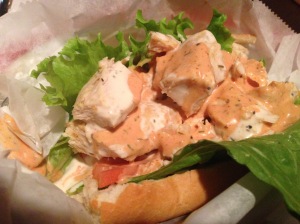 One of the best sandwiches I’ve ever had. The chicken was impossibly juicy and full of flavor and the sauces were amazing! I would eat this everyday if I lived in Savannah.

The Husband made a rookie mistake and listened to a local instead of Adam. He ordered the Godfather, a sausage and chicken parm sandwich. Don’t get me wrong, it was really good. But not nearly as fantastic as the Conquistador.

The vibe was kind of artsy/hippie. Not my style generally but it worked well and it gave the place a comfortable hanging out kind of feel. 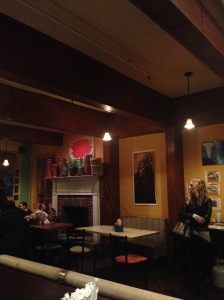 They also have a rooftop area but it was cold and I seem to have Floridian blood now, so we didn’t check it out. But we definitely will the next time we’re in Savannah.

Confession: we returned that same night for late night dinner. And yes, we both had the conquistador sandwich.